This update highlights recent additional items, which will improve our historical collection and understanding of the working of our Lodge, it also follows the short Masonic career of a Brother who achieved so much and enhanced our lodge by his presence.

Priory of Monklands: - Order of Malta

Bro. Gordon Cowan's father was Bro. Hugh Cowan, a member of our Lodge.

Hugh received his MM degree the same evening as myself* on the 14th February 1974.

I had the honour and privilege knowing him as both man and mason.
He worked tirelessly for our lodge throughout the 6-years he was a member until his relatively early death in the year 1980, at which time he held the office of Senior Deacon.

Hugh was aspiring, and looked forward to possibly one day becoming an Installed Master of our Lodge, therefore, following in his father's footsteps.

The Masonic career of this brother has been chronicled by the use of our detailed Lodge minutes, documents, minutes from Sister Lodges, and offers an insight into a Brother's journey, from initial application to IPM.

When he joined our Lodge in the year-1917, his entry in the "Roll of Members Book" reads: -

At the age of 28-years, he was a trained and experienced Pattern Maker.

When War in Europe broke out in 1914, his age and occupation would exempt him from being drafted to His Majesties Forces.

26/4/1917  Ballot and Initiation; during the evening 6 -Brethren were initiated, the charity collection taken being 3-shillings and 9d (18-pence)

10/5/1917  Fellow Craft degree; a total of 7-Brethren passed. Our RWM was not present, as he had met with an accident at work. Bro Neill Low was welcomed back to his Mother Lodge after absence due to Military Service.

02/5/1917 David attended a special meeting, (PGLvisit) who gave a favourable report. PGL thanked our lodge for the donation of £10 towards the

14/6/1917 The ceremony of Mark Master Mason; conferred on 20-Brethren by Bro.Thomas A. Deas PM. This particular ceremony was written and compiled by Bro Deas and is still used in our Lodge today.

Note: - Bro Deas had been RW Conferring Master for all of David's degrees having    deputised for our RWM. (A ritual worker of the highest standards.)

27/10/1917 Acting Inner Guard; (6 months after his MM degree). His first experience of a post which required knowledge, presence, and speaking to an audience. Only one year, and one day after receiving his MM degree David conferred the EA degree as Inner Guard (acting Junior Deacon). During the same year he was Conductor when 29-Brethrenn were advanced to the MMM Degree.

26/12/1917 Boxing Day Installation Meeting; Lieutenant Colonel Peter Spence PM 88 installed him into the office of Inner Guard. At this meeting David gave a report of an abstract statement of accounts, which was considered satisfactory.

Earlier in the year, the "Peace Minute" was recorded when a meeting took place under the "Burning Influence of Peace". Bro. John Carmichael VC had joined our lodge; he presented a "Roll of Honour" to all members who had served in His Majesties Forces.

EA degree on 30-candidates, and was MMM Conductor on 32-Brethren. During this time, up to 20-applications would be read at one meeting, he subsequently served 2- years as WSW.

When elected he served as RWM also for two years. During this period a proposal was made; that the Installation should be temperate; the motion was defeated.

As RWM he signed a petition to be forwarded to the Grand Lodge of Scotland, craving a Charter to form a lodge in the neighbouring village of Caldercruix.

As a result of the Charter being granted; on the evening of 11/10/1923 he welcomed for the first time, into our Lodge the RWM of Caldercruix St John No 1314, in the name of Bro. Robert Samuel, of the youngest Lodge in Scotland.

The consecration of Lodge No 1314 had taken place only seven days earlier.

OFFICE BEARERS and PAST MASTERS 1924

David Cowan's last meeting as RWM was, on Christmas Day when he was presented with his Past Masters Jewel.

10/12/1925 Installation Meeting; all business was completed and 24-posts were filled. A sad announcement was then made informing the Brethren of sudden death of Bro. David Cowan PM. Our RWM described him as being hale and hearty at the previous meeting; our IPM had been taken from our midst after a very short illness of only 5-days.

He was an enthusiastic worker whose cheery smile would be missed. The lodge entered into a period mourning for one Month and the harmony for that evening cancelled. Draping would be obtained from local shops for lodge regalia (still in use today). The organist played the "Dead March in Saul".

The following extracts were taken from "The Airdrie & Coatbridge Advertiser" and illustrates the notification of David's death, and the response of sister lodges to the sad news.

Cowan: - Suddenly on the 9th inst, at 97, Forest St Airdrie, David Cowan, in his 40th year, beloved Husband of his wife Euphemia Kiddie.

Masonic Funeral; the RWM's request a large attendance of Brethren and Office Bearers within the Masonic Temple, to attend the funeral of our late Brother David Cowan PM New Monkland Montrose Lodge 88

12/12/1925 Our lodge was opened, passed raised and adjourned. The Brethren were marshalled and proceeded to the residence of our deceased Brother, where a service was conducted by the Minister, after which his remains were carried from his home shoulder high by four Past Masters of the lodge acting as pallbearers.

A number of over two hundred Brethren made up the cortege headed by the Airdrie Old Union Band, playing "The Dead March in Saul" followed by the hearse. The Brethren walked in procession to New Monkland Cemetery to solemn music.

Rev. Bro E. Sherwood Gunson, Lodge Chaplain, carried out the graveside committal. The Past Masters of his Mother Lodge, his family, relatives and friends, laid Bro Cowan to rest.

The Brethren formed into procession and subsequently returned to the lodge, where our RWM thanked all Brethren and the many visitors for their attendance. Our Lodge was then closed.

At a later date, the standing committee of our Lodge placed a floral wreath displaying a "Square and Compass" on the grave of our deceased Brother.

The sum of £10 was granted towards funeral expenses incurred by the widow of Bro. Cowan. 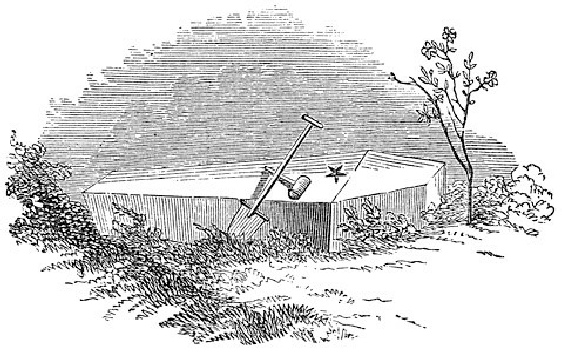 "Well done thy good and faithful servant,enter thou, into the joy of thy Lord"