A petition was presented to the Grand lodge of Scotland on the 16th March 16/03/1762 craving a charter be granted. 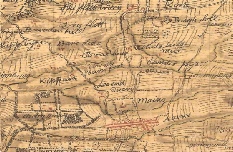 1798 An Act of Parliament was passed for seditious organisations, to comply with this Act.

Bro James Legat, Lint Clover, and Bro James Rankin, Weaver, swore an oath in front of a Magistrate, and then registered in the Hamilton and Campsie Sheriff Court the names, and professions of all  members of the lodge, and where and when the lodge held their meetings.

17/11/1823 Lodge Woodhall St John No 305 within their minute book have the only record to date of the Lodge having existed as Newmonkland Montrose No 83 and the meeting place was Mrs Hasties Inn, Holytown.

1834 The Lodge is recorded in a sister lodges minutes as being dormant and on the 4/01/1836 the same lodge records within their minutes that the whole clothing of New Monkland would be purchased for the sum of £1 10/- shillings.

5/02/1838 The Lodge fails to pay its financial arrears to Grand Lodge and is struck off the roll of the Grand Lodge of Scotland. 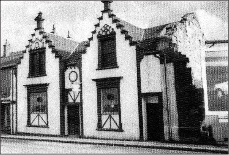 This is believed to be the Masons Hall referred to within an article of the Glasgow courier on Thursday 18th of November 1819.

At Airdrie and within the Old Town Tavern on the twelfth day of September eighteen hundred and fifty one,  a letter from Grand Lodge was read intimating that the Grand Lodge had agreed to the said Lodge New Monkland Montrose No 88, revised.

Granting full power and authority to proceed with the proper working of the said Lodge, and several Brethren present having agreed to act as office bearers for the occasion the Lodge was regularly opened.

1856 Now meeting in the Trades Hall and the three Airdrie Lodges agree to join in a Masonic Procession.

The following year the same lodges hired a steamboat for the sum of £30 to sail a day trip to Rothesay.

Sadly he committed suicide, age 37 at his home in Kinning Park.

1862 Centenary Celebrations. The various lodges were accompanied by brass bands, and proceded to the Town Hall, thereafter being served with refreshments. They formed into procession and marched to New Monkland Parish Church. The public were admitted to the gallery of the church to hear the sermon.

01/04/1902 The lodge had moved their meetings to the Albion Hall and P G L proceeded with the Consecration of the Lodge Room. The Provincial Grand Chaplain conducted the prayers, grand honours and readings, with the P G M pronouncing the Benediction.

The Most Worshipful Grand Master Mason of Scotland, the Most Honourable, Bro John Stuart Murray, the Marquess of Tullibardine, DL, MP, MVO, headed a large and distinguished deputation.

After the commemoration service both he and Bro Robert King Stewart of Murdostoun, Provincial Grand Master of Lanarkshire Middle Ward accepted Honorary Membership of the Lodge.

1918 Peace was declared, and it was agreed that a “Roll of Honour”  be produced and each Brother having served in H.M. Forces during the European War to be granted one.

THE AFTERMATH OF WAR

And mony a widow mourning.

I left the wars and tented fields

Whaure lang I’d been a Lodger,

A humble knapsack a’ my wealth,

A puir but honest sodger.

1952 The “Lodge Banner “ is once again in the possession of the Lodge.

And it was agreed that it be displayed on special occasions. 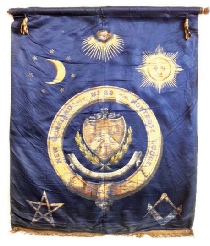